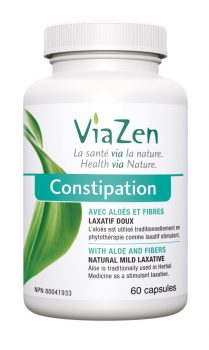 The association of Viazen Constipation components is the key of the effectiveness of this SUPERIOR FORMULA.

Who should take Viazen Constipation?

Viazen Constipation will be taken as needed to relieve constipation in an amount of 1 to 3 capsules once a day, a few hours before or after taking other medications or natural health products. The effect will be felt from the first use.

In order to fully benefit the product, it is important to drink at minimum 1.5 liters of water per day.

– Can cause soft stools, flatulence, diarrhea and/or abdominal discomfort.
– While taking thiazide diuretics, corticosteroids, licorice root, or other medications or natural health products that may aggravate electrolyte imbalance.
– While taking cardiac medications (such as cardiac glycosides or antiarrhythmic medications).
– In presence of the following health disorders: diabetes, kidney disorder, faecal impaction or symptoms such as abdominal pain, nausea, vomiting or fever.
– Reduce the dose or discontinue use if you experience abdominal pain, cramps, spasms and/or diarrhea and consult a health care practitioner if symptoms persist and/or worsen.
– Consult a health care practitioner if you experience chest pain, vomiting, or difficulty swallowing or breathing after taking Viazen Constipation.

– Do not use if you are pregnant or breastfeeding.
– Do not use if you have abnormal gastrointestinal tract constriction, swallowing disorder, potential or existing intestinal blockage, atonic bowel, appendicitis, inflammatory colon disease (such as Crohns disease or ulcerative colitis), abdominal pain of unknown origin, undiagnosed rectal bleeding, severe dehydration with depleted water and electrolytes, hemorrhoids or diarrhea.
– Do not used if you are allergic to anethol or plants belonging to the Apiaceae/Carrot family.

Constipation occurs when a delay or difficulty in bowel movements is observed. It can be occasional (travel, stress, pregnancy, etc.) or chronic. Chronic constipation is when the problem persists from at least six to twelve months.

There are two forms of constipation. Transit constipation (or progress constipation); in presence of slow passage of feces within the intestinal tract. Terminal constipation (evacuation constipation); when feces accumulate in the rectum due to poor anorectal motility. The two conditions may coexist in the same person.

During digestion, the intestines contract to move food through the digestive tract. This phenomenon is called peristaltic contractions. In presence of constipation, peristalsis is slowed and feces remain in the colon for too long. The longer they stay, the stools become harder and difficult to pass, because a larger amount of water in stools has been reabsorbed by the colon cells.

Constipation can also be a clinical manifestation of several pathologies: diverticulitis, colorectal cancer, hypothyroidism, diabetic neuropathy, Parkinson’s disease, etc. In rare cases, constipation due to Hirschsprung’s disease, which occurs from birth, is attributed to the absence of certain nerve cells in the intestine.

It is important to know that many medications can cause constipation, including some laxatives when taken for long periods, anxiolytics, antidepressants, morphine, codeine, some antispasmodic (anticholinergic), anti-inflammatory, muscle relaxants, some antihypertensive, diuretics, antacids containing aluminum, etc. Some iron supplements may cause constipation.

Finally, constipation can result from allergies or food intolerances including lactose in cow’s milk.