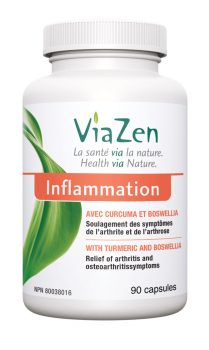 The ingredients synergy of Viazen Inflammation is the key of the effectiveness of this SUPERIOR FORMULA.

Viazen Inflammation is a powerful natural anti-inflammatory with broad spectrum of action related to 4 scientifically recognized medicinal substances. Joined together in one product, these substances inhibit effectively pro-inflammatory substances production into the body.

Viazen Inflammation will be taken on a regular basis, at a rate of 1 capsule with every meal, during a minimum of three consecutive months. Symptoms relief will begin to be observed rapidly, after a few days of use, but depending on the intensity and chronicity of the inflammatory problem, the optimal results will appear after a few weeks or a few months of treatment. Ingest Viazen Inflammation a few hours before or after taking other medication.

Do not use with anticoagulants, antiplatelets and antibiotics. Take note that Viazen Inflammation does not replace medical prescription of anti-inflammatory drugs.

Inflammation results from the organism reaction process against an aggressive agent. This agent, responsible of the inflammation, can be of infectious origin (a bacteria or a virus), a chemical reaction (contact with toxic substances), related to an immune imbalance (allergies, cellular antigens (tissue graft), foreign antigens (autoimmune process) or resulting from a physical trauma (radiations, frictions).

What does occur exactly?

Initially the affected part of the body reacts in contact with the aggressive agent. The inflammatory reaction includes complex physiological and metabolic events, modulated and orchestrated by inflammation mediators (histamine, prostaglandins, cytokines, etc.). These mediators come from cells or plasma.

Redness and heat are caused by blood vessels dilatation and by the increased blood flow in the affected area. The release of a liquid (inflammatory exudate) in the intercellular space will generate tumefaction (swelling). The pain which appears, results from the compression of nerve terminations by the tumefaction and by the action of chemical factors released in the affected area.

Lastly, a general discomfort, associated to tiredness and light depression, appears according to the important energy request during the inflammatory process.

The term arthritis is the generic term regrouping more than one hundred of acute and chronic joint inflammatory affections. Majority of arthritis affections are chronic, which means that their development occurs on several months or years, and makes life invalidating.

Specific touched joints, pain and ankylosis levels vary from an individual to another and according to the type of the joint disease. The inflammation may be present at the level of one, several or the whole structures which compose the joint (the joint capsule, the synovial membrane, the cartilage, ligaments and tendons).

Inflammation may be present only on one or on several joints in the same time. All joints of the musculoskeletal system can be touched by arthritis. This disease affects the hips, the knees, the ankles, the feet, the fingers, the wrists, the elbows, the shoulders and the vertebral column. Here are some current clinical symptoms:

Symptoms intensity will vary according to the type of the disease. They can also vary from one person to another. Certain people will have remission period, during which symptoms attenuate, or can even disappear completely. In long term, the overproduction of inflammation will have bad consequences on joint health, since it will generate a loss of joint mobility.